Home
Hair Color
Can You Use Hair Dye Without Developer? Instead of developer, is there any good alternative? 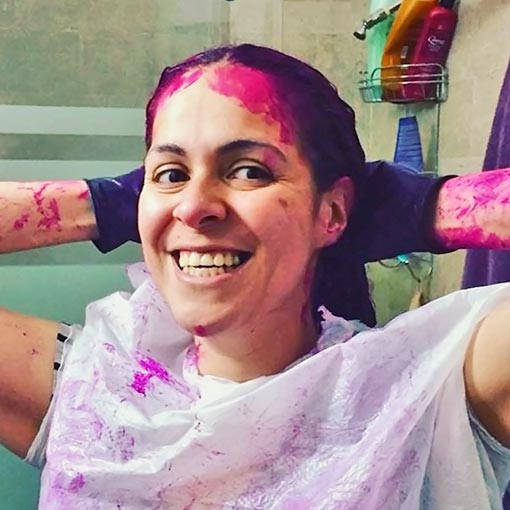 Today, I opened my email, and among some things, one strongly called my attention.

They asked me if it was possible to apply a dye in your hair without a developer or peroxide.

I admit that even though I was missing a good dose of morning caffeine since I had just woken up five minutes before, the question left me perplexed.

It was the first time in my entire professional career that I had been asked that question. And people have asked me all different kinds of questions, some of which, frankly, are quite out there.

And no offense, this is one of those out-there questions.

Let’s see; I’ll give you another example.

Let’s imagine that I want a pair of stiletto heels. After driving the saleswomen crazy, I got home, and the first thing that I did was take off the shoes. What would you think?

Let’s look at another example.

My best friend invited me to one of those trendy lunch restaurants. I was dying to try the ravioli in a mushroom sauce.

When the kid left me the plate, the only thing that I devoured was the small mushroom pieces.

What would you think?

Obviously, that somewhere there was a screw loose.

Anuncios
Anuncios
With the question about if you can apply the color to your hair without peroxide or developer, the same thing happened to me.

I’ll tell you why I’m not crazy, nor is there a screw loose, but before I tell you:

What is developer used for in the coloring process? 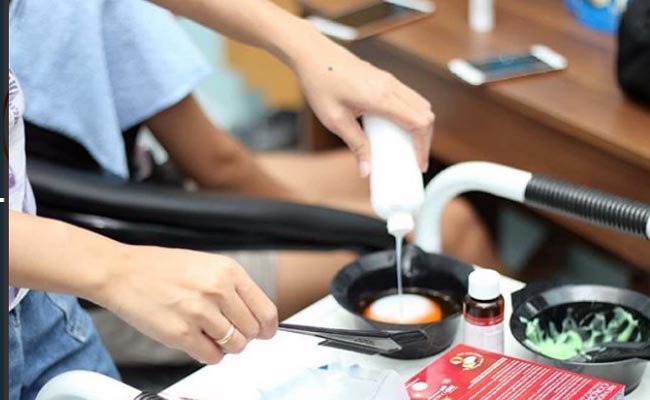 The email left me and my knowledge turned upside down because I didn’t understand what would bring a person to ask me this question.

The idea is simple.

If you want to color your hair, it is important to change the color. Plain and simple.

At this moment, I’m not going to explain how the color wheel works, not to bore you with explanations.

Let’s go from the basics that a person knows already about the color theory and change their hair color.

What do you need to achieve this?

Very good! You will need a dye.

But for the dye to act in your hair, you will need another element.

What will you need?

Bravo once again! You will need an oxidizing agent called a developer or hydrogen peroxide. /su_highlight]

Why will you need a developer?

I’ll give you that answer directly.

The dye has a property that provides the color molecules to the hair.

But for these molecules to be deposited in the hair, they have to enter the hair’s stalk.

That’s where peroxide enters the battle.

Because as if it were a knight in shining armor, it penetrates the cuticle of the hair with his sword in hand, pulling up the scales of the cuticle.

And that is where the dye can act.

In reality, what you should do is mix both elements before applying them to your hair so that they can do their job.

As its name indicates, the developer will draw up the cuticles, and the color will apply the new color pigments.

They are something like Batman and Robin, except that Batman works perfectly without Robin and vice versa.

In the case of the dye and the peroxide, it’s not the same. They need each other; it’s a symbiotic relationship in which each one gets benefits from the other.

After my years of experience, I can guess that perhaps the girl from the email wanted to know if there were dyes that don’t need peroxide.

And that’s where things change.

Because there are dyes that are designed to work without needing peroxide.

Even though there are certain disadvantages than with those that act together with peroxide.

What alternatives exist to not use peroxide when dyeing hair 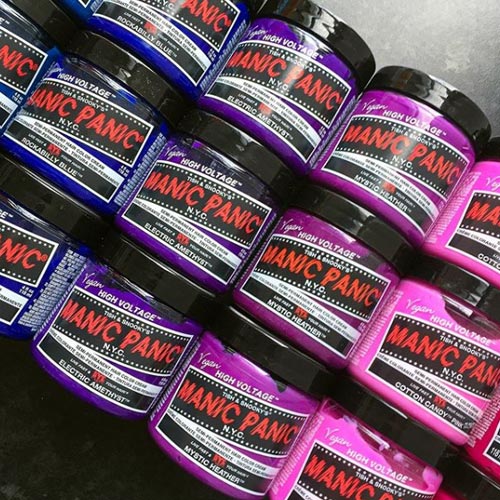 Manic Panic is one of the most used semi-permanent hair dyes, check its price on Amazon

The dyes that work together with peroxide are called permanent dyes.

As we saw before, the peroxide draws up the hair cuticle to allow the color molecules to penetrate to the interior and deposit them.

This will make the new color last longer in the hair, at least three or four weeks. Obviously, this will always depend on the number of times you wash your hair during the week.

Anuncios
Anuncios
For those people that are afraid of peroxide because, by the way, it’s an aggressive element for your hair, there are other kinds of dyes.

Dyes that don’t need to act together with peroxide. They are called semi-permanent dyes. 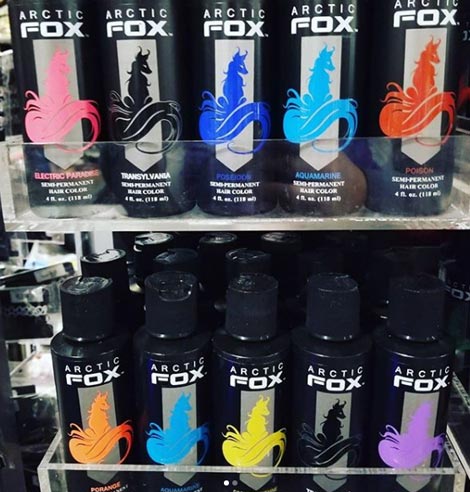 Since they don’t use peroxide, the dye’s color molecules are deposited on the external part of the hair. Meaning, it doesn’t modify the internal melanin of the hair.

It could last two weeks, and once again, that will depend on the number of times you wash your hair.

Another disadvantage is that with semi-permanent dye, you will never be able to lighten your hair, only darken it.

Now, it also has its advantages from not using peroxide. To start with, most formulas for semi-permanent dyes are vegan.

This means that they don’t use ingredients like parabens and sulfates, which tend to dry out the hair.

The exact opposite. Their formulas are enriched with ingredients like olive oil, argan oil, or collagen, depending on the brand we are talking about.

That’s why if you are afraid of peroxide, maybe semi-permanent dyes are best for you.

Are you not a fan of changing your hair color, and it not last very long?

Then you should use permanent dyes that only work with peroxide.

But there is a way to minimize the damage the developer does to your hair. 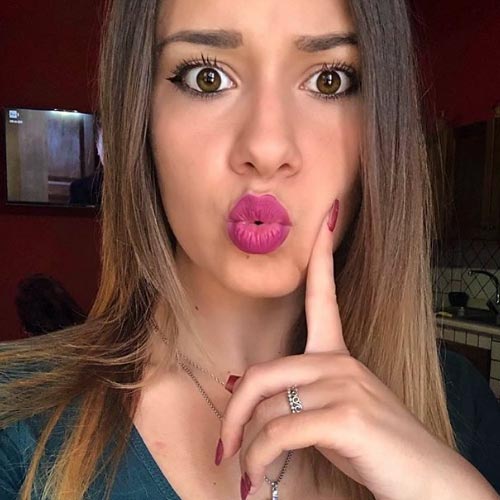 To be completely sincere, any chemical process on your hair implies some damages.

Coloring is a chemical process because the ingredients used in it modify the hair’s internal structure.

Even so, there are a few tricks so that this damage is a little as possible.

So, keep reading because, in the end, I will give you the recipe for a homemade mask to minimize the damages caused by peroxide.

If you want your hair to be healthy after dyeing it, two weeks before, you should nourish it and hydrate it.

Doing deep hydration treatments at least twice a week, and the night before you color it, apply coconut oil to your hair.

Let it sit overnight, applying a shower cap, so you don’t stain your pillowcase.

Excessive heat reduces the moisture in your hair, which can result in broken and weak hair.

There are different grades, or volumes, of peroxide or developer. You can choose from volume 10 to volume 40.

But be careful, 40-volume peroxide should only be used by a professional.

Because if your hair is blonde and you use a 40-volume peroxide, you’ll practically fry your hair.

I recommend that you start with a 40-volume peroxide if you want to lighten your hair in two tones.

Hot water makes the cuticles on the exterior layer of the stalk of the hair increase, which means the loss of moisture and frizz.

And your hair is also more susceptible to damage. To prevent this, rinse your hair with cold water because this will seal the cuticles, control the frizz, and seal the color in the hair’s stalk.

And now, what I promised.

The loss of moisture and dryness are the most common secondary effects when you use developer.

Once a week, apply this natural mask to your hair, and you’ll see how the damage of the developer are dramatically reduced.

Now you know why you will need to use peroxide if you want to dye your hair permanently.

But you also know how to protect your hair best to minimize the damage.

Do you know any other ways to prevent the developer from damaging your hair every time you color it? 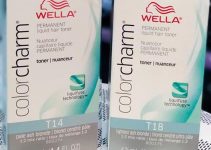 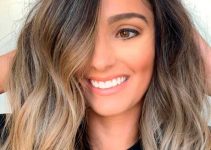 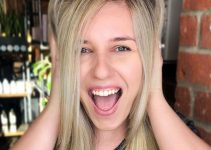 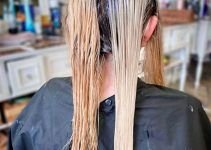 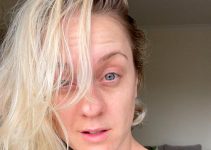